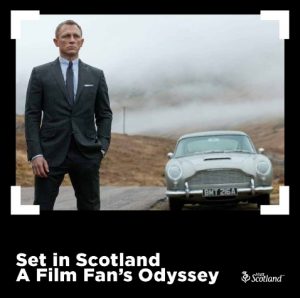 The national tourism organisation VisitScotland’s new book, which contains details of more than 100 films shot in Scotland over the decades, is published as Daniel Craig takes on the role of agent 007 for the fourth time in Spectre.

Set in Scotland: A Film Fan’s Odyssey, which will be available free of charge in VisitScotland Information Centres throughout the country, in branches of Waterstones and for download at visitscotland.com from today (27 October 2015), capitalises on the growing trend of set-jetting. It is the first Scotland-wide film locations guide VisitScotland has produced.

Featuring everything from The 39 Steps, the 1935 Alfred Hitchcock film which includes the iconic Forth Bridge, through Chariots of Fire and Gregory’s Girl to the Harry Potter films and Prometheus, right up to 2015 movies Macbeth and Sunset Song, which were partially shot in Skye and Aberdeenshire respectively, Set in Scotland is aimed at visitors eager to follow in the footsteps of the film stars.

There are special sections on James Bond – the spy with the Glen Coe ancestry – and Bollywood, as well as honorary mentions for popular television series such as Outlander, Downton Abbey and Balamory.

It also details some of the more surprising places that Scotland has stood in for on the silver screen, including Turkey (From Russia With Love), San Francisco (Cloud Atlas), Vermont (Flash Gordon) and even the surface of Jupiter (2001: A Space Odyssey).

Specialist research and consultation was provided by David Martin-Jones, Professor of Film Studies at Glasgow University, including dedicated input with regard to Gaelic filmmaking, Bollywood location shoots and filming in Orkney and Shetland.

Cabinet Secretary for Culture, Europe and External Affairs, Fiona Hyslop, said: “Scotland’s towns, cities and countryside play their own show-stealing parts in the stories being told here for production firms across the world. VisitScotland’s new film locations guide details more than 100 films shot in Scotland over the last decades and provides an opportunity for us to showcase not only Scotland’s internationally renowned heritage but also the wealth of natural beauty that our country has to offer.”

Mike Cantlay, Chairman of VisitScotland, said: “The list of films and locations featured in Set in Scotland is not exhaustive, but the guide serves as a fantastic way to introduce visitors to our country’s many scene-stealing roles on the silver screen. It is a handy and fun way for people to enjoy a set-jetting holiday in Scotland, to follow in the footsteps of the stars and to find out why this country has inspired generations of film-makers.”

Professor Martin-Jones, who also provides the foreword to Set in Scotland, said: “Scotland has a tremendous heritage as a film location. It has provided unforgettable settings for some of the most iconic moments in film history. This helpful guide will allow visitors to experience these memorable locales first hand, turning memories of the silver screen into reality.”

In June 2015, Scotland was voted Best Cinematic Destination by readers of USA Today in an online poll, while research shows that 40 per cent of visitors to the UK are inspired to visit locations after seeing them on film or on television.

To see the full publication online please click the image.

Created by VisitScotland and The Highland Council, The Highlands & Skye Movie Map highlights around 50 filming locations and features everything from Hollywood [...]